You are here: Home » News » Is It Ever Safe to Drink Bleach?

What Happens to Your Body If You Drink Bleach

Household bleach has many uses. It's good for removing stains and disinfecting surfaces. Adding bleach to water is an effective way to make it safe to use as drinking water. However, there's a reason there is a poison symbol on bleach containers and a warning to keep them away from children and pets. Drinking undiluted bleach can kill you. 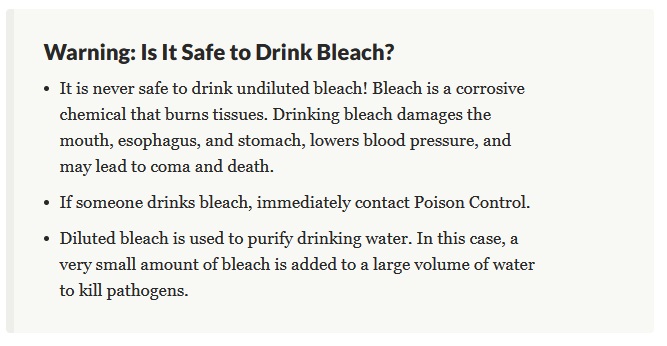 What Is in Bleach?

Ordinary household bleach sold in gallon jugs (e.g., Clorox) is 5.25% sodium hypochlorite in water.﻿ Additional chemicals may be added, especially if the bleach is scented. Some formulations of bleach are sold containing a lower concentration of sodium hypochlorite. Additionally, there are other types of bleaching agents.

What Happens If You Drink Bleach

Sodium hypochlorite removes stains and disinfects because it is an oxidizing agent. If you inhale the vapors or ingest bleach, it oxidizes your tissues.﻿ Mild exposure from inhalation can result in stinging eyes, a burning throat, and coughing. Because it is corrosive, touching bleach can cause chemical burns on your hands unless you wash it off immediately. If you drink bleach, it oxidizes or burns tissues in your mouth, esophagus, and stomach. It can also cause chest pain, lowered blood pressure, delirium, coma, and potentially death.

What Should You Do If Someone Drinks Bleach?

If you suspect someone has ingested bleach, contact Poison Control immediately. One possible effect from drinking bleach is vomiting, but it is not advisable to induce vomiting because this can cause additional irritation and damage to tissue and may put the person at risk of aspirating bleach into the lungs.﻿ First aid typically includes giving the affected person water or milk to dilute the chemical.

Note that highly diluted bleach can be another matter entirely. It is common practice to add a small amount of bleach to water to make it potable. The concentration is enough that the water has a slight chlorine (swimming pool) smell and taste but does not cause any harmful health effects.﻿ If it does, the concentration of bleach very likely is too high. Avoid adding bleach to water that contains acids, such as vinegar. The reaction between bleach and vinegar, even in a diluted solution, releases irritating and potentially dangerous chlorine and chloramine vapors.

If immediate first aid is administered, most people recover from drinking bleach (sodium hypochlorite poisoning). However, the risk of chemical burns, permanent damage, and even death are present.

How Much Bleach Is OK to Drink?

According to the U.S. EPA, drinking water should contain no more than four ppm (parts per million) chlorine. Municipal water supplies commonly deliver between 0.2 and 0.5 ppm chlorine.﻿ When bleach is added to water for emergency disinfection, it is highly diluted. Suggested dilution ranges from the Centers for Disease Control are eight drops of bleach per gallon of clear water up to 16 drops per gallon of cloudy water.

Can You Drink Bleach to Pass a Drug Test?

There are all kinds of rumors about ways you can beat a drug test. Obviously, the easiest way to pass the test is to avoid taking drugs in the first place, but that's not going to be much help if you've already taken something and are facing a test.

Clorox says their bleach contains water, sodium hypochlorite, sodium chloride, sodium carbonate, sodium hydroxide, and sodium polyacrylate. They also make scented products that include fragrances. Bleach also contains small amounts of impurities, which aren't a big deal when you're using the product for disinfection or cleaning but could prove toxic if ingested. None of these ingredients binds to drugs or their metabolites or inactivates them such that you would test negative on a drug test.

Bottom Line: Drinking bleach won't help you pass a drug test and may make you sick or dead.