You are here: Home » News » Why Is the Ocean Salty?

Why the Sea Is Salty (Yet Most Lakes Are Not) 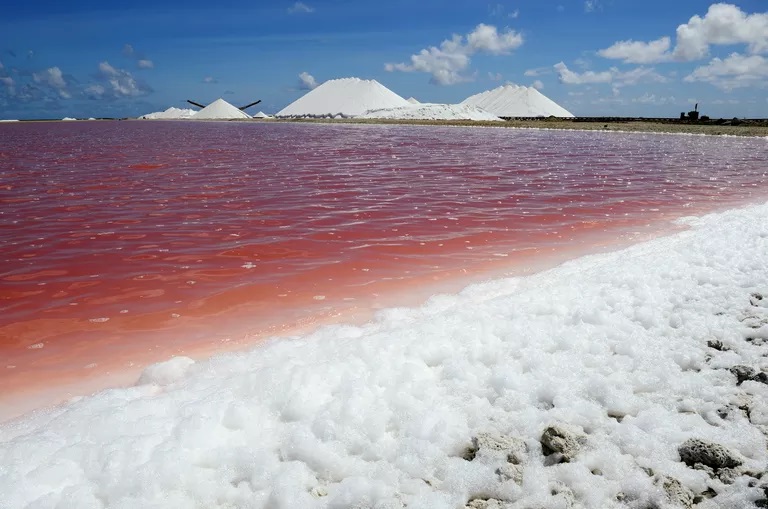 Have you ever wondered why the ocean is salty? Have you wondered why lakes might not be salty? Here's a look at what makes the ocean salty and why other bodies of water have a different chemical composition. 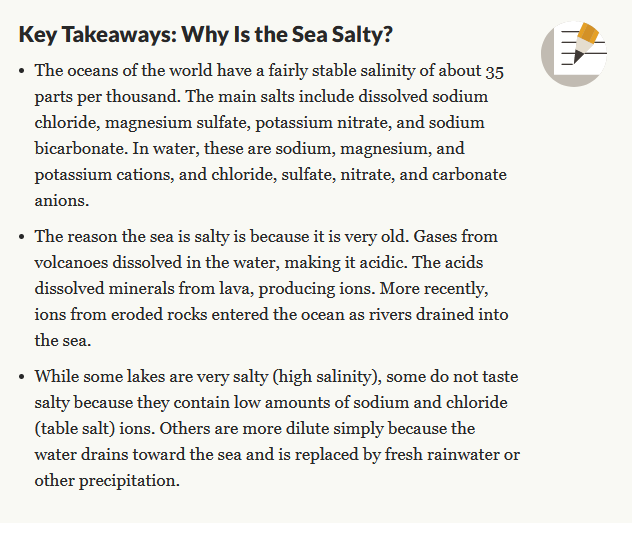 Why the Sea Is Salty

Oceans have been around a very long time, so some of the salts were added to the water at a time when gases and lava were spewing from increased volcanic activity. The carbon dioxide dissolved in water from the atmosphere forms weak carbonic acid which dissolves minerals. When these minerals dissolve, they form ions, which make the water salty. While water evaporates from the ocean, the salt gets left behind. Also, rivers drain into the oceans, bringing in additional ions from rock that was eroded by rainwater and streams.

The saltiness of the ocean, or its salinity, is fairly stable at about 35 parts per thousand. To give you a sense of how much salt that is, it is estimated that if you took all the salt out of the ocean and spread it over the land, the salt would form a layer more than 500 feet (166 m) deep. You might think the ocean would become increasingly salty over time, but part of the reason it does not is because many of the ions in the ocean are taken in by the organisms that live in the ocean. Another factor may be the formation of new minerals.

So, lakes get water from streams and rivers. Lakes are in contact with the ground. Why aren't they salty? Well, some are! Think of the Great Salt Lake and the Dead Sea. Other lakes, such as the Great Lakes, are filled with water that contains many minerals, yet doesn't taste salty. Why is this? Partly it is because the water tastes salty if it contains sodium ions and chloride ions. If the minerals associated with a lake don't contain much sodium, the water won't be very salty. Another reason lakes tend not to be salty is because water often leaves lakes to continue its trip toward the sea. According to an article in Science Daily, a drop of water and its associated ions will remain in one of the Great Lakes for around 200 years. On the other hand, a water droplet and its salts may remain in the ocean for 100-200 million years.

The most dilute lake in the world is Lae Notasha, located near the crest of the Oregon Cascade in Oregon, United States. Its conductivity ranges about 1.3 to 1.6 uS cm-1, with bicarbonate as the dominant anion. While a forest surrounds the lake, the watershed appears not to significantly contribute to the ionic composition of the water. Because the water is so dilute, the lake is ideal for monitoring atmospheric contaminants.