7 Chinese New Year Foods that will Bring You Good Luck

7 Chinese New Year Foods that will Bring You Good Luck 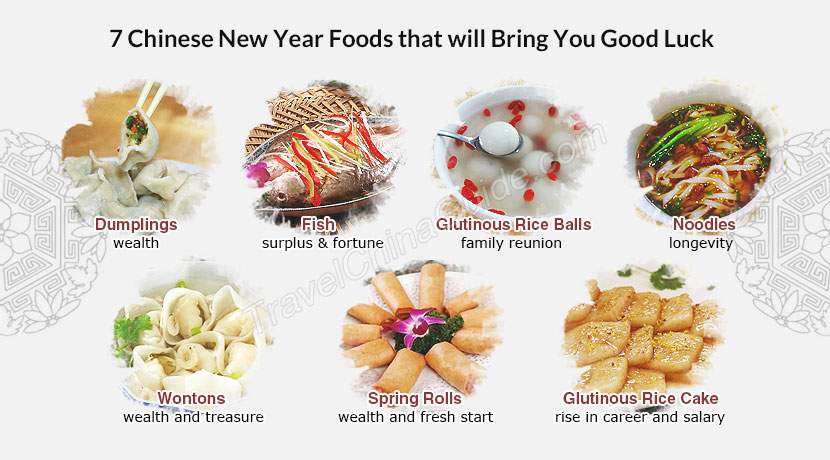 The dumpling is a traditional lucky food in China and enjoys worldwide popularity now. With a history of 1,800 years, it is not only a staple food of people in Northern China, but also an essential dish in various festivals, especially in Chinese New Year.

Dumplings are often eaten on the New Year’s Eve for its Chinese name ‘jiaozi’ has a meaning of changing of years.

Meanings:
– symbol of wealth for its shape like an ancient Chinese gold ingot.
– Lucky coins will be hidden in dumplings and someone who discovers them can get the best of luck and great wealth in the coming year.

Referring to the Chinese New Year food ideas, fish is an indispensable dish on the reunion dinner.

Fish has its Chinese pronunciation as ‘Yu’, which means surplus and fortune. So there is a blessing speech as ‘Nian Nian You Yu’ in Chinese which means that ‘May you have surpluses and bountiful harvests every year.’ What’s more, in ancient China, fish was also regarded having a function of exorcising.

Some rules of eating fish in Chinese New Year:
1. Don’t turn over the fish after you have finished eating one side. In Chinese culture, it means unlucky.
2. To show respect, the head of fish needs to be placed toward elders or distinguished guests.


3. In southern China, some people just eat the middle part of the fish on the New Year Eve, leaving the head and tail to the next day to symbolize completeness.

Glutinous Rice Balls, aka Tangyuan and Yuanxiao, is a lucky food during the Lantern   Festival (Yuanxiao Festival). However, in many places of Southern China, it is also a Chinese New Year food. Unlike dumplings, the dough of Tangyuan is made by glutinous rice powder with the stuffing such as bean paste, brown sugar and all kinds of fruits and nuts.

There are two kinds of Glutinous Rice Balls:
– Tangyuan in south China: Make the wrappers first, fill in the stuffing, and then knead them into balls.
– Yuanxiao in north China: Filling is divided into small balls first, and put into a sifter with flour. Shake the sifter to let the flour stick onto the balls.

Meaning: The round shape represents completeness and family reunion.

There is no doubt that Longevity noodles are a special food for Chinese New Year. They are usually eaten on important festivals or one’s birthday, especially for old people. Eating longevity noodles in the New Year symbolizes that everything is going to be smooth in the coming year.

Flavor: salty; some sour and spicy

Tip: The longevity noodle is made by one single and continuous noodle. You must eat it from the beginning to the end and don’t break it while eating, or the good wish will be broken.

Meaning: People believe that eating wontons can bring wealth and treasure. On the other hand, Wonton in Chinese has similar pronunciation with “Hundun”, which means the beginning. Eating Wontons in the New Year symbolize a wish of a good start.

It is obvious to see from the name Spring Rolls that it is a food to welcome the spring so it’s very common to enjoy them during the Spring Festival.

Fresh vegetables or ingredients in spring time are wrapped inside and people eat it to welcome a new spring. Now it has also become a dessert in some places in the reunion dinner.

Flavor: both sweet and salty

Meaning: The golden appearance shows the wealth and treasure, which also means a fresh start.

As one of the traditional Chinese New Year foods, Glutinous Rice Cake with a history of 1,500 years was originally used to worship the gods and ancestors.

Widely eaten in different parts of China, it is made of glutinous rice powder but varies in ingredients and flavors – jujube Niangao and white Niangao in Beijing, yellow rice cake in Shanxi, water mill rice cake in Ningbo, Guangdong Niangao with brown sugar, and fried Niangao with ribs in Shanghai.

Flavor: both sweet and salty

Meaning: The Chinese pronunciation of the Cake, Niangao, has a homophonous meaning of ‘increasing prosperity year after year’, which gives people new hope of a rising performance in career and study.