You are here: Home » News » Are Sharpie Tattoos Safe? 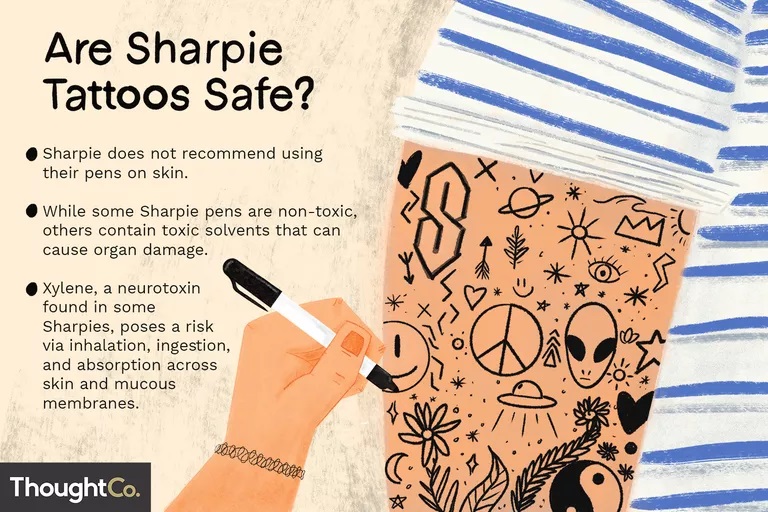 Have you ever wondered whether it's safe to write on yourself with a Sharpie marker or use a Sharpie to make fake tattoos? Would it surprise you to learn some tattoo artists work out a design using Sharpies before inking it? Sharpie and Your Skin

According to Sharpie's blog, markers that bear the ACMI "non-toxic" seal have been tested and deemed safe for art, even by children, but this does not include body art, such as drawing eyeliner, filling in tattoos or making temporary tattoos. The company does not recommend using the markers on skin. In order to bear the ACMI seal, a product must undergo toxicological testing for the Arts and Creative Materials Institute. The testing is concerned with inhalation and ingestion of the materials and not absorption into the bloodstream, which could occur if chemicals in the marker permeate the skin or enter the body through broken skin.

Sharpie pens may contain n-propanol, n-butanol, diacetone alcohol, and cresol. Although n-propanol is considered safe enough to be used in cosmetics,﻿ the other solvents may cause reactions or other health effects. For example, at air levels of 50 ppm, n-butanol is associated with eye, nose, and throat irritation. Diacetone alcohol is an irritant to human eyes at the exposure level of 100 ppm for 15 minutes.

Three types of Sharpie markers contain xylene, a chemical capable of causing damage to the respiratory, central nervous, cardiovascular, and renal systems.﻿ Only the King Size Sharpie, Magnum Sharpie, and Touch-Up Sharpie contain this chemical. Inhaling the vapor released by these markers or ingesting their contents can cause injury. However, it's not technically correct to call this "ink poisoning" because the issue is the solvent, not the pigment.

Some tattooists use Sharpies to draw designs on the skin, but red markers using azo dyes have been connected to allergic reactions creating complications in long-healed tattoos.﻿

For the most part, it's the solvents in the ink of a Sharpie pen that present a health concern more than the pigments, so once you've drawn on yourself and the ink has dried, there is not a lot more risk from the product. It appears reactions to the pigments are uncommon. The pigment only penetrates the top layers of skin, so the ink will wear off within a few days. If you wish to remove the Sharpie ink rather than let it wear off, you can apply mineral oil (e.g., baby oil) to loosen the pigment molecules. Most of the color will wash away with soap and water once the oil has been applied.

Rubbing alcohol (isopropyl alcohol) will remove Sharpie ink, but alcohols penetrate the skin and may carry undesirable chemicals into the bloodstream. A better choice is grain alcohol (ethanol), such as you might find in hand sanitizer gel. Although ethanol also penetrates intact skin, at least the type of alcohol isn't particularly toxic. Completely avoid using toxic solvents, such as methanol, acetone, benzene, or toluene. They will remove the pigment, but they present a health risk and safer options are readily available.

Sharpie ink rests on the skin's surface, so the primary risk comes from solvent getting absorbed into the bloodstream. Tattoo ink, on the other hand, may pose a risk of ink poisoning from both the pigment and the liquid portion of the ink.﻿