You are here: Home » News » Industry encyclopedia » Chemistry in Every Cup（2）

Chemistry in Every Cup（2）

Chemistry in every cup（2）

Kraft’s Chu is greatly interested in exactly how coffee could help prevent diabetes. In his in vitro experiments on human fat cells, coffee doubled the levels of glucose uptake. In the body, such an increase in uptake would lower glucose levels in the blood. But it is not yet clear which coffee compounds induce cells to take up more glucose. Chu has ruled out caffeine, which had no effect on fat cells when applied alone, and CGA concentrations do not seem to correlate with levels of cell stimulation. Identifying which compounds stimulate the glucose uptake and determining whether the effect is related to their ability to bind to insulin receptors is of ’significant nutritional and pharmacological importance’, says Chu.

Chu has tested the ability of coffee to protect neurons, at least in vitro, and found that treatment with either green or roasted coffees protects cells against oxidative stress induced by hydrogen peroxide. The roasted coffee was far better at protecting cells than green coffee, perhaps because it has 30 times more lipophilic antioxidant activity. Chu’s team, which included researchers from National Yang-Ming University in Taiwan, suggests that lipophilic antioxidants such as chlorogenic acid lactones are key to coffee’s apparent neuroprotective effects, possibly because the brain is such a lipid-rich organ. Chu stresses that more work is now needed to identify ’key neuroprotective coffee bioactives’.

Chu’s team has also studied coffee’s anti-inflammatory effect on cells in the lab. The main putative anti-inflammatory components are chlorogenic acids, he says. Yet in experiments with pure CGA, Chu was unable to achieve the same results as with coffee. ’The pure compound does not have the same level of inflammatory inhibition as whole coffee, so we propose that there is a matrix effect whereby components of coffee work together to provide benefits,’ says Chu. 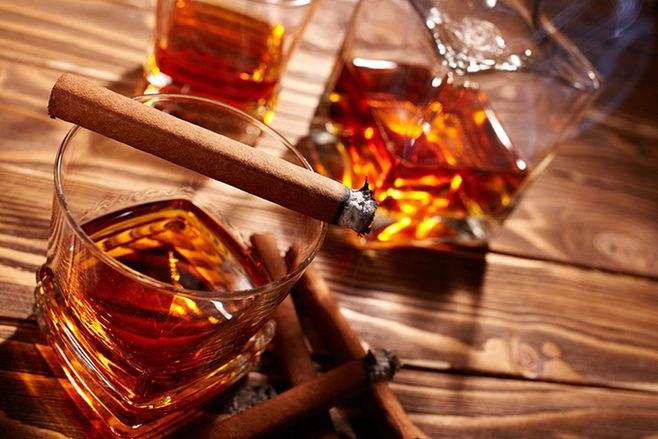 Caffeine in the bloodstream

Caffeine is known to improve memory and the speed with which our brains process information. It binds to some of the same receptors as adenosine, a compound that promotes sleep, amongst other things. Caffeine is a non-selective antagonist at A1 and A2A adenosine receptors in the heart and the brain, having an opposite effect to adenosine and producing a stimulant effect.

There is also a suggestion that caffeine can perhaps benefit those suffering from Alzheimer’s disease. The theory is that blocking the A2A receptors weakens the damage caused by beta-amyloid, the peptide that accumulates in the brain with Alzheimer’s. Giving caffeine to mice engineered to have the disease limited their levels of beta-amyloid and increased adenosine levels. Human studies have not brought out strong links between caffeine and Alzheimer’s although analysis of Finnish data on 1409 people over 21 years led by Marjo Eskelinen at the University of Kuopio, Finland, suggested that people who drank 3-5 cups of coffee per day had a greatly reduced risk of developing Alzheimer’s or dementia。

The Finnish study was by no means the only one to suggest that caffeine may help to stop a decline in brain activity with old age. In the Three City study, carried out in the French cities of Bordeaux, Dijon, and Montpellier between 1999 and 2001, over 9000 people aged over 65 were questioned about their levels of tea and coffee consumption and their mental agility assessed using standard tests. When a team of French researchers led by Karen Ritchie at Montpellier University analysed the data, it suggested that there was a ’significant relationship’ between higher caffeine intake in women without dementia and ’lower cognitive decline over time’. Curiously, no relationship was found between caffeine intake and cognitive decline in men.6 Not to worry - a team led by researchers at the National Institute for Public Health and the Environment in Bilthoven, the Netherlands, suggests that ’consuming coffee reduces cognitive decline in elderly men’ based on analysis of data from a 10-year study of men from Finland, Italy and the Netherlands.

Of course, there are negatives. For example, coffee contains 4-methylimidazole, which the US National Toxicology Program (NTP) has identified as a carcinogen. The compound is used to manufacture many products, from dyes to agricultural chemicals and rubber. But it can also form through the Maillard reaction in foods and drinks, particularly those with a caramel flavour such as Cola.7 The levels of 4-methylimidazole in cola drinks are similar to those in coffees, says Takayuki Shibamoto, at the Department of Environmental Toxicology at the University of California, Davis, US.

Understanding how the chemical forms in coffee and how to prevent it from forming is not easy,’ says Shibamoto. Nevertheless, he is committed to the task, largely because the compound is listed by the California Environmental Protection Agency as a ’Proposition 65 carcinogen’ in California, US. This means that food or drink products known to contain levels of the chemical exceeding the 16ug per day consumption limit must be labelled as such.

The original NTP study suggested that 4-methylimidazole caused cancer in mice fed up to 1250ppm of the compound for two years, equivalent to up to 170mg/kg of body weight for the mice. A 60kg person drinking a whole 591ml (20 fl oz) bottle of cola would only ingest 3.3ug/kg of 4-methylimidazole, says Shibamoto, so coffee drinkers would be likely to have even less exposure.

Then there’s the suspected carcinogen acrylamide (2-propenamide), which is highly water-soluble and also thought to come from the Maillard reaction. Last March the European Chemical Agency added acrylamide to its ’list of substances of very high concern’. Acrylamide formation peaks at some point in the roasting process before decreasing significantly. The degree of roasting is therefore a key factor in determining acrylamide content, says Rita Alves, from the University of Porto in Portugal.

Alves and her team have analysed acrylamide levels in espresso coffee and shown that light roasts contain significantly more acrylamide than dark ones. Bean type also appears to affect acrylamide levels and Robusta  espressos contain almost twice as much acrylamide as their Arabica  counterparts, says Alves. She estimates that what she calls a ’moderate’ espresso consumer who drinks 3-5 cups per day will probably ingest about 4-6ug of acrylamide per day.

Alves admits that it is nigh on impossible to cut acrylamide levels in coffee without affecting quality, but suggests opting for higher levels of Arabica beans and a darker roast. A short espresso rather than a ’lungo’, which takes twice as long to prepare, may also have a lower level of acrylamide because the chemical has less opportunity to transfer to the drink, she says.

So many chemicals to think about. If you already enjoy drinking coffee, it is nice to think that you might be doing yourself some good. Do you take milk? Or sugar? If so, you may be changing the antioxidant chemistry. Crozier has already shown that adding cream to strawberries slows absorption of antioxidants and studying the effects of additives on the bioavailability of coffee’s antioxidants is next on the agenda for many coffee chemists.

Whatever the science may be, coffee certainly gets the brain into gear in the morning and gives much pleasure. Just remember the key word that is never far from a nutritionist’s lips when it comes to red wine and coffee: moderation.