You are here: Home » News » How Poisonous Are Green Potatoes?

How Poisonous Are Green Potatoes?

How Poisonous Are Green Potatoes? 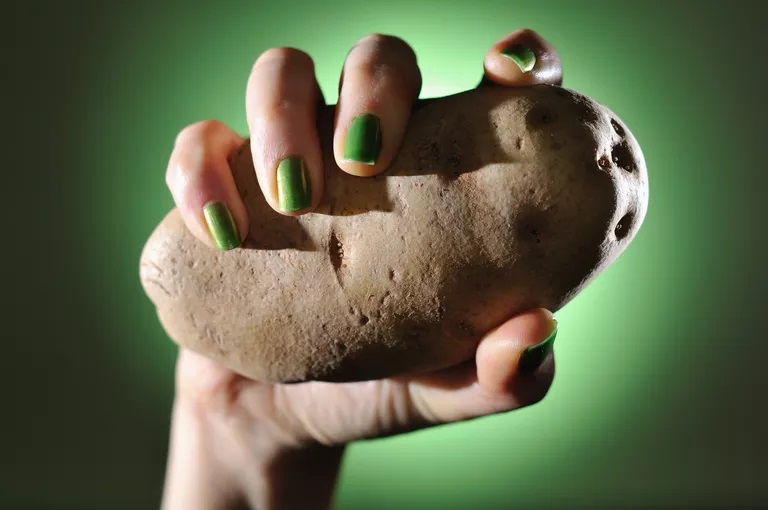 Have you ever been told to avoid the green part of some potatoes because they're poisonous? Potatoes, and especially any green part of the plant, contain a toxic chemical called solanine. This glycoalkaloid poison is found in all members of the nightshade family of plants, not just potatoes. The chemical is a natural pesticide, so it protects the plants from insects. How toxic is solanine from potatoes? Which other plants contain solanine, what are the symptoms of solanine poisoning, and how many potatoes would you have to eat to get sick or die?

Deadly nightshade is the most lethal member of the plant family. The berries are a well-known classic poison. Many edible plants are related to deadly nightshade but they are not nearly so dangerous. They include:

The onset, type, and severity of the symptoms of exposure depend on an individual's sensitivity to the chemical and the dose. Symptoms may appear as quickly as 30 minutes after eating solanine-rich foods but usually occur eight to 12 hours after ingestion. Gastrointestinal and neurological symptoms are most noticeable. At low levels, symptoms include stomach cramps, nausea, burning throat, headache, dizziness, and diarrhea. Cardiac dysrhythmia, hallucinations, vision changes, slowed breathing, fever, jaundice, hypothermia, loss of sensation, dilated pupils, and death have all been reported.

How Many Potatoes Does It Take?

Basically, an adult would need to eat a lot of potatoes to get sick...usually.

Solanine isn't the only toxic chemical found in potatoes. A related compound, chaconine, is also present. Potato shoots (eyes), leaves, and stems are higher in glycoalkaloids than potatoes, but green potatoes contain significantly higher amounts of the toxic compounds than non-green portions. In general, the solanine is concentrated in the potato skin (30 to 80 percent), so eating just the skin of the potato or its eyes would be more likely to cause a problem than eating the whole spud. Also, solanine levels vary according to potato variety and whether or not the plant was diseased. Potato blight, in particular, elevates toxin levels.

Since there are so many factors, it's difficult to put a number of how many potatoes is too many. Estimates on how many potatoes you'd have to eat on average to get sick or die are around four and a half to five pounds of normal potatoes or two pounds of green potatoes. A large potato weighs roughly half a pound, so it's reasonable to expect you could get sick from eating four potatoes.

Protecting Yourself Against Solanine Poisoning

Potatoes are nutritious and delicious, so you shouldn't avoid eating them just because the plant contains a natural defensive chemical. However, it's best to avoid green-colored skin or potatoes that taste bitter (both signs of high solanine content). The National Institutes of Health advises people to avoid eating potatoes with green skin. Peeling green potatoes will remove most of the risk, although eating a few potato chips with green edges won't hurt an adult. It's recommended that green potatoes not be served to children since they weigh less and are more susceptible to the toxin. Neither children nor adults should eat potato plant leaves and stems. If you do experience the symptoms of solanine poisoning, contact your doctor or a poison control center.

If you experience solanine poisoning, you can expect to experience symptoms for one to three days. Hospitalization may be required, depending on the level of exposure and severity of symptoms. Treatment typically includes replacing fluids and electrolytes from vomiting and diarrhea. Atropine may be given if there is significant bradycardia (slow heartbeat). Death is rare.