You are here: Home » News » Mixing Bleach and Vinegar

Why You Should Never Do This 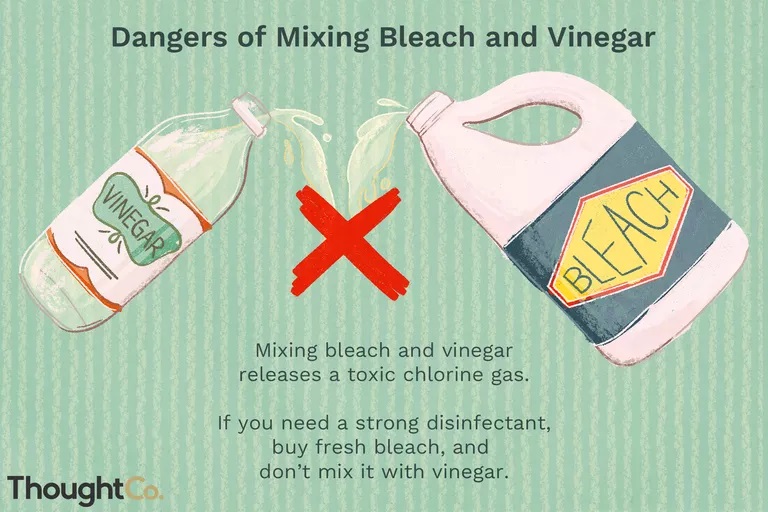 Why People Mix Bleach and Vinegar

If mixing bleach and vinegar releases toxic chlorine gas, then why do people do it? There are two answers to this question. The first is that vinegar lowers the pH of bleach, making it a better disinfectant. The second is that people don't recognize how dangerous this mixture is or how quickly it reacts. When people hear mixing the chemicals makes them better cleaners and disinfectants, they don't always realize the cleaning boost isn't going to make enough of a difference to justify the considerable health hazard.

What Happens When Bleach and Vinegar Are Mixed

Hypochlorous acid is a strong oxidizer. This is what makes it so good at bleaching and disinfecting. If you mix bleach with an acid, chlorine gas will be produced. For example, mixing bleach with toilet bowl cleaner, which contains hydrochloric acid, yields chlorine gas:

Although pure chlorine gas is greenish-yellow, gas produced by mixing chemicals is diluted in air. This makes it invisible, so the only way to know it's there is by the smell and negative effects. Chlorine gas attacks mucous membranes in the eyes, throat, and lungs—these attacks can be deadly. Mixing bleach with another acid, such as the acetic acid found in vinegar, yields essentially the same result:

There is an equilibrium between the chlorine species that is influenced by pH. When the pH is lowered, as when adding toilet bowl cleaner or vinegar, the ratio of chlorine gas is increased. When the pH is raised, the ratio of hypochlorite ion is increased. Hypochlorite ion is a less efficient oxidizer than hypochlorous acid, so some people will intentionally lower the pH of bleach to increase the oxidizing power of the chemical even though chlorine gas is produced as a result.

What You Should Do Instead

Don't poison yourself! Rather than increasing the activity of bleach by adding vinegar to it, it's safer and more effective to simply purchase fresh bleach. Chlorine bleach has a shelf life, so it loses power over time. This is particularly true if the container of bleach has been stored for several months. It's far safer to use fresh bleach than to risk poisoning by mixing bleach with another chemical. It is fine to use bleach and vinegar separately for cleaning as long as the surface is rinsed between products.