You are here: Home » News » The Chemical Composition of Nail Polish

The Chemical Composition of Nail Polish

The Chemical Composition of Nail Polish

Do You Know What's in Your Manicure? 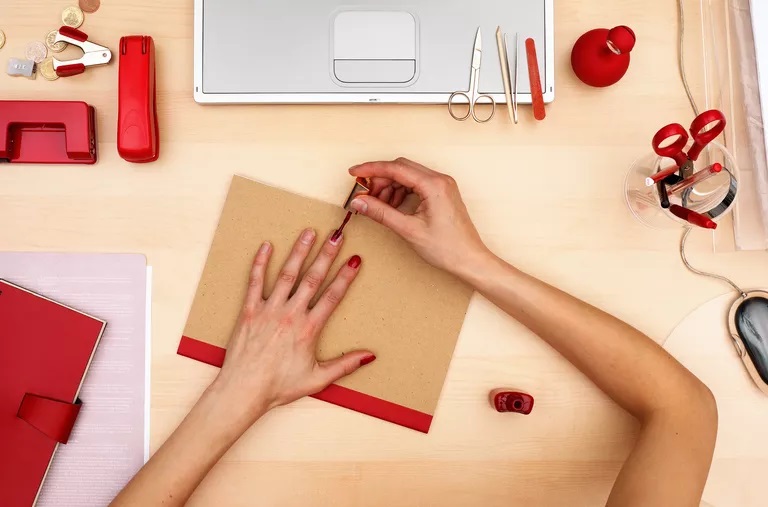 Nail polish is a type of lacquer that's used to decorate fingernails and toenails. Because it has to be strong, flexible, and resist chipping and peeling, nail polish contains a number of chemicals. Here's a look at the chemical composition of nail polish and the function of each of the ingredients.

Basic clear nail polish can be made from nitrocellulose dissolved in butyl acetate or ethyl acetate. The nitrocellulose forms a shiny film as the acetate solvent evaporates. However, most polishes contain an extensive list of ingredients.

Solvents are liquids used to mix other ingredients in nail polish to yield a uniform product. Usually, the first ingredient(s) in nail polish are solvents. Once you apply the polish, the solvents evaporate away. The amount and type of solvent determine how thick a polish is and how long it will take to dry. Examples of solvents include ethyl acetate, butyl acetate, and alcohol. Toluene, xylene, and formalin or formaldehyde are toxic chemicals that were once common in nail polish but are rarely found now or found only in low concentrations.

Film formers are chemicals that form the smooth surface on a coat of nail polish. The most common film former is nitrocellulose.

Resins make the film adhere to the nail bed. Resins are ingredients that add depth, gloss, and hardness to the film of nail polish. An example of a polymer used as a resin in nail polish is tosylamide-formaldehyde resin.

While resins and film formers give polish strength and gloss, they produce a brittle lacquer. Plasticizers are chemicals that help keep polish flexible and reduce the chance that it will crack or chip, which they do by linking to polymer chains and increasing the distance between them. Camphor is a common plasticizer.

Pigments are chemicals that add color to nail polish. An astonishing variety of chemicals may be used as nail polish pigments. Common pigments include iron oxides and other colorants, such as you'd find in paint or varnish.

Nail polish that has a shimmery or glittery effect may contain pearlescent minerals, such as titanium dioxide or ground mica. Some polishes may contain bits of plastic glitter or other additives that produce a special effect.

Nail polishes may contain thickening agents, such as stearalkonium hectorite, to keep the other ingredients from separating and to make the polish easier to apply. Some polishes contain ultraviolet filters, such as benzophenone-1, which help prevent discoloration when the polish is exposed to sunlight or other forms of ultraviolet light.