You are here: Home » News » Industry encyclopedia » The Chemistry of Matches

The Chemistry of Matches

The Chemistry of Matches 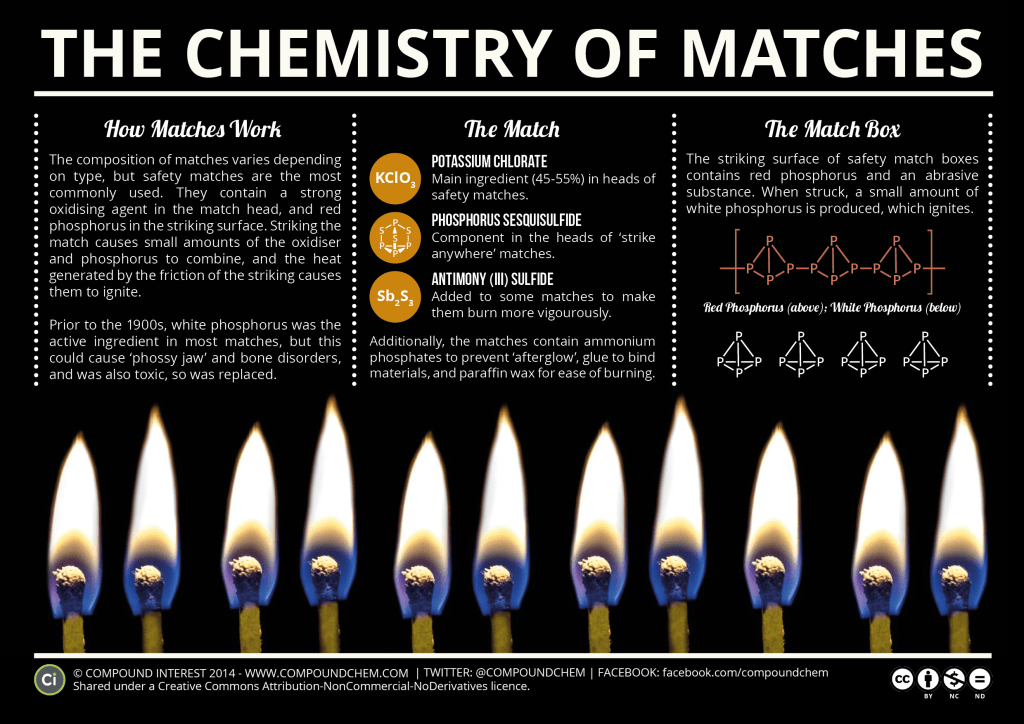 Matches, as it turns out, have been around for a long time. Sulfur-based matches are mentioned as far back as the 1200s in texts of the time, and in the 1600s a process involving drawing sulfur matches through dried phosphorus-soaked paper was devised. However, the friction matches we’re used to have their origins in the 1800s; the first were developed by the English chemist, John Walker, in 1826. His matches involved a mixture of potassium chlorate, antimony (III) sulfide, gum and starch, which ignited when struck on sandpaper. These matches were somewhat unreliable in whether or not they would successfully strike, however.

So how do the safety matches of today function? The red phosphorus is, in fact, no longer found in the head of the match – rather, it’s located on the striking surface on the side of the box, mixed with an abrasive substance such as powdered glass. The match head contains an oxidising agent, commonly potassium chlorate, and glue to bind it to further abrasive materials and other additive compounds. These can include antimony (III) sulfide and/or sulfur, added as fuel to help the match head burn.

When the match is struck, a small amount of the red phosphorus on the striking surface is converted into white phosphorus, which then ignites. The heat from this ignites the potassium chlorate, and the match head bursts into flame. During manufacture, the match stick itself is soaked in ammonium phosphate, which prevents ‘afterglow’ once the flame has gone out, and paraffin, which ensures that it burns easily.

Unlike safety matches, ‘strike anywhere’ matches don’t require the red phosphorus striking surface in order to ignite. This is because they contain phosphorus in the match head, in the form of phosphorus sesquisulfide. Other than this difference, however, they still function in much the same way.