You are here: Home » News » What Chemicals Are In Cigarette Smoke?

What Chemicals Are In Cigarette Smoke?

What Chemicals Are In Cigarette Smoke?

Experts say that cigarette smoke contains over 4,000 different compounds. A significant number of them are toxic (poisonous) and can damage our cells and many of them are carcinogenic (cause cancer). If you've ever wondered exactly what you might be breathing in when you inhale cigarette smoke, this list is a real eye opener.

We've listed information on a few compounds found in tobacco and cigarette smoke. Note that the most abundant ones, tar, nicotine and carbon monoxide are at the bottom of this list:

 Acetaldehyde - this chemical is used in resins and glues. It is believed to be a carcinogen. Experts say it is likely that it facilitates the absorption of other dangerous chemical into the bronchial tubes.

 Acetone - this chemical is used in solvents. It irritates the eyes, nose and throat. Long-term exposure can damage the liver and kidneys.

 Acrolein - commonly used in herbicides and polyester resins. It is also used in chemical warfare. Acrolein is an ingredient in tear gas. It is very poisonous and irritates the eyes and upper respiratory tract.

 Acrylonitrile - also known as vynil cyanide. Experts believe it is a human carcinogen. It is used in synthetic resins, rubber and plastics.

 1-aminonaphthalene - in ingredient in weed killers. It is a known carcinogen.

 2-aminonaphthalene - this substance causes bladder cancer. It is banned in industrial uses. 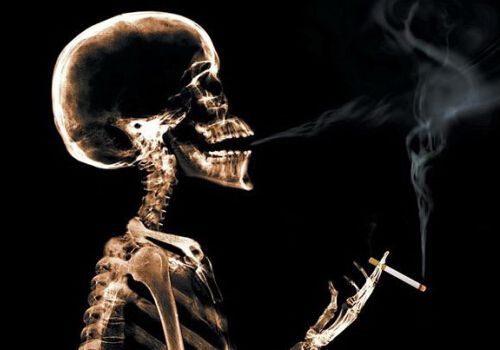  Ammonia - it is known to cause asthma and raise blood pressure. Ammonia is used in cleaners.

 Benzo pyrene - this chemical is found in coal tar pitch, and creosote. It is a known carcinogen, especially for lung and skin cancers. It can also undermine human fertility.

 1,3-Butadiene - it is used in latex, rubber and neoprene products. Experts believe it is most likely a carcinogen.

 Butyraldehyde - this chemical affects the lining of the lungs and nose. It is used in solvents and resins. It is a powerful inhalation irritant.

 Catechol - it elevates blood pressure and irritates the upper respiratory tract. It can also cause dermatitis. Catechol is used as an antioxidant in oils, inks and dyes.

 Chromium - known to cause lung cancer. It is used in wood treatment, wood preservatives, metal plating and alloys. Those involved in welding have the greatest risk of exposure.

 Cresol - acute inhalation can cause throat, nasal and upper respiratory irritation. It is used in disinfectants, wood preservatives and solvents.

 Crotonaldehyde - a warning agent in fuel gasses. Experts say it messes up the human immune system. It can also cause chromosomal changes.

 Formaldehyde - part of the resin used in foam insulation, plywood, fiberboard and particleboard. It can cause nasal cancer, as well as damaging the digestive system, skin and lungs.

 Hydrogen Cyanide - some states use this chemical in their gas chambers for executions. It weakens the lungs and causes fatigue, headaches and nausea. It is used in the production of acrylic plastics and resins, and can also be a fumigant.

 Hydroquinone - has a detrimental effect on the central nervous system. Also causes eye injuries and skin irritation. It is used in varnishes, motor fuels and paints.

 Isoprene - similar to 1,3-butadiene. It causes skin, eye and mucous membrane irritation. It is used in rubber.

 Lead - lead damages the nerves in the brain, as well as the kidneys and the human reproductive system. Lead intake can also cause stomach problems and anemia. It is a known carcinogen and is particularly toxin to children. Lead is used in paint and metal alloys.

 Nitric Oxide - this is a major contributor to smog and acid rain. It is made by gasoline combustion. Scientists say it is linked to a higher risk of developing Alzheimer's disease, Parkinson's disease, Huntington's disease and asthma.

 NNN, NNK, and NAT - NNN and NNK are known carcinogens and NAT might be one. The three compounds are unique to tobacco. NNN may also cause reproductive problems. NNK is closely linked to lung cancer risk.

 Phenol - this highly toxic substance is harmful for the CNS (central nervous system), cardiovascular system, respiratory system, the kidneys and liver. It is used in resins in plywood and construction materials.

 Propionaldehyde - irritates the respiratory system, skin and eyes. It is used as a disinfectant.

 Pyridine - irritates the eyes and upper respiratory tract. It also causes nervousness, headaches and nausea. Experts say it might cause liver damage. This substance is used in solvents.

 Quinoline - it is used for stopping corrosion and also as a solvent for resins. It is a severe eye irritant, is harmful to the liver, and causes genetic mutations. Experts believe it may be a carcinogen.

 Resorcinol - irritates the eyes and skin. It is used in resins, adhesives (glue) and laminates.

 Styrene - irritates the eyes, may slow down reflexes, and causes headaches. It is linked to a higher risk of leukemia. This substance is used in fiberglass, pipes, plastic and insulation materials.

 Nicotine - this is not carcinogenic. However, it is highly addictive. Smokers find it very hard to quit because they are hooked on the nicotine. Nicotine is an extremely fast-acting drug. It reaches the brain within 15 seconds of being inhaled. If cigarettes and other tobacco products had no nicotine, the number of people who smoke every day would drop drastically. Without nicotine, the tobacco industry would collapse. Nicotine is used as a highly controlled insecticide. Exposure to sufficient amounts can lead to vomiting, seizures, depression of the CNS (central nervous system), and growth retardation. It can also undermine a fetus' proper development.

 Carbon Monoxide - this is a poisonous gas. It has no smell or taste. The body finds it hard to differentiate carbon monoxide from oxygen and absorbs it into the bloodstream. Faulty boilers emit dangerous carbon monoxide, as to car exhausts. If there is enough carbon monoxide around you and you inhale it, you can go into a coma and die. Carbon monoxide decreases muscle and heart function, it causes fatigue, weakness, and dizziness. It is especially toxic for babies still in the womb, infants and indifividuals with heart or lung disease.

 Tar - consists of several cancer-causing chemicals. When a smoker inhales cigarette smoke, 70% of the tar remains in the lungs. Try the handkerchief test. Fill the mouth with smoke, don't inhale, and blow the smoke through the handkerchief. There will be a sticky, brown stain on the cloth. Do this again, but this time inhale and the blow the smoke through the cloth, there will only be a very faint light brown stain.