You are here: Home » News » Why Does Alcohol Make You Pee?

Effects of Alcohol on Your Body's Biochemistry

If you've ever had a drink, you know it sent you to the bathroom, but do you know why alcohol makes you pee? Do you know how much more urine you produce or whether there is a way to reduce it? Science has the answer to all these questions: 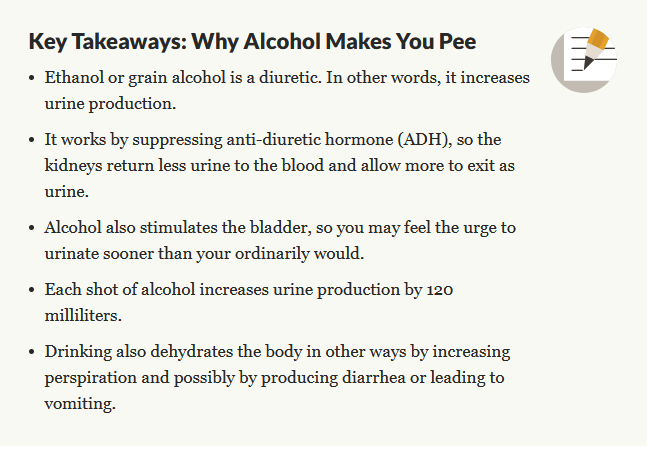 Alcohol is a diuretic. What this means is, when you drink alcohol, you produce more urine. This happens because alcohol suppresses release of arginine vasopressin or anti-diuretic hormone (ADH), the hormone that allows your kidneys to return water to your bloodstream. The effect is additive, so drinking more alcohol increases the level of dehydration. Another part of the reason you visit the bathroom more often is because alcohol also stimulates the bladder, so you'll feel the urge to pee sooner than you would ordinarily.

How Much More Do You Have To Pee?

It matters how hydrated you are before you start drinking. According to the July-August 2010 issue of "Alcohol and Alcoholism," you'll produce less urine from drinking alcohol if you are already dehydrated. The biggest dehydrating effect is seen in people who are already hydrated.

Other Ways Alcohol Dehydrates You

Urination isn't the only way you become dehydrated from drinking alcohol. Increased perspiration and possibly diarrhea and vomiting can make the situation even worse.

The "Breaking the Seal" Myth

Some people believe you can stave off the need to pee by waiting as long as possible to "break the seal" or urinate for the first time after you start drinking. It's a myth that the first pee is a signal telling your body you need to visit the bathroom every 10 minutes until the booze clears your system. The truth is, waiting just makes you uncomfortable and has no effect on how frequently or copiously you will pee from that point on.

Can You Reduce the Effect?

If you drink water or a soft drink with alcohol, the diuretic effect of the alcohol is reduced by about half. These means you'll get less dehydrated, which helps to reduce your chance of getting a hangover. Other factors also affect whether you'll get a hangover, so adding ice to a drink, drinking water, or using a mixer may help, but won't necessarily prevent headache and nausea the next morning. Also, since you're increasing your fluid intake, diluting the alcohol won't make you pee less. It means a smaller volume of that urine will be from the dehydrating effect of the booze.

It's worth noting, no matter how many beers you drink or how much water you add, the net effect is dehydration. Yes, you are adding a lot of water to your system, but each shot of alcohol makes it that much harder for your kidneys to return that water to your bloodstream and organs.

People can live if the only liquid they get is from alcoholic beverages, but they get water from food. So, if you were stranded on an island with nothing to drink except rum, would you die of thirst? If you didn't have lots of fruit to offset the dehydration, the answer would be yes.